Sub Title
About us
Center Text and Photo

We have a small and perfectly formed team at our family-run brewery. Despite coming from a wide range of backgrounds and industries, we are united by a love for great beer and a passion to deliver the best product possible for our customers. 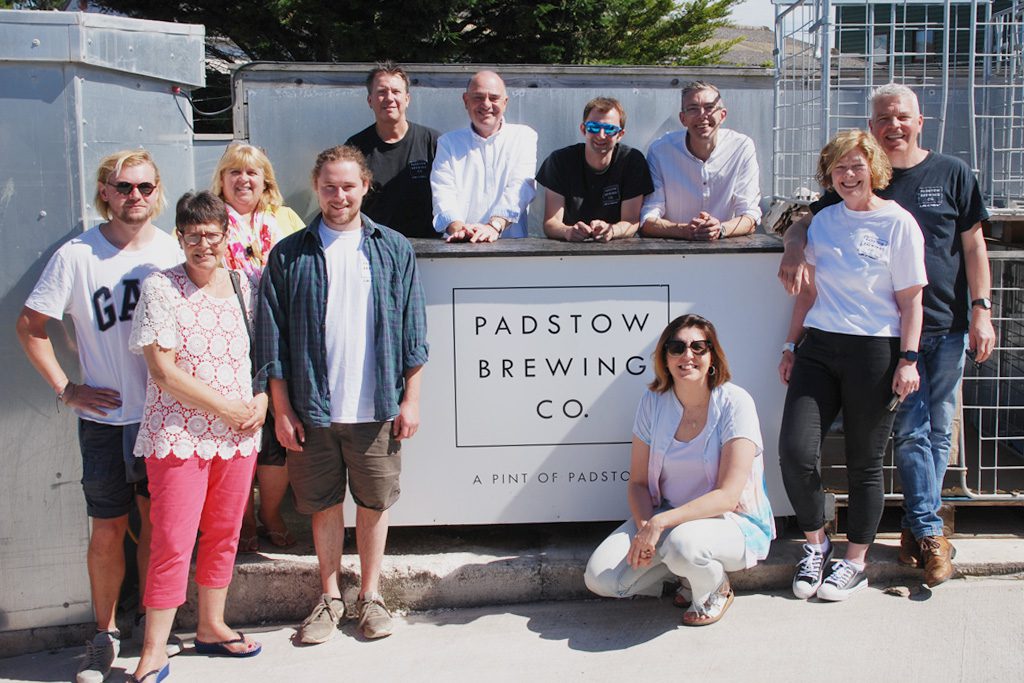 The Story behind our Beer

Our beers are genuinely hand crafted - tested for quality at every stage of the brewing process - and packaged with real love and care.

Each recipe is unique, and driven by our desire to create a fantastic product, not to reduce costs or find cheaper ingredients.

We buy malt from Warminster Maltings - which is the oldest floor malting house in the country - and we pay a premium for over 150 years of malting expertise because we think it makes the final product better.

We work closely with our customers, delivering the beer ourselves whenever possible, and building lasting relationships.

We are a genuine, independent brewery, making beers we really love.
Dates Carousel

How it all Began

2013
2014
2015
2017
2018
2019
Brewing started in January 2013 in a converted surf shower, testing out recipe ideas. The equipment was tiny (just 100 litres) but still too big for the 4-foot square space; only one person could get in at a time. If you weren’t inside you were out, and if it rained you just got wet. Something had to give. We moved out of the surf shower into an industrial unit on the outskirts of Padstow, and moved up to a custom-built brewery. When Padstow IPA won two awards later that year at the Falmouth Beer Festival, we knew we were on to something.
After leaving the old surf shower for our current, 2000 litre brewery, in 2014 our branding and design work was rewarded with a SIBA award for Best Total Design Concept. We remain proud of our unique, timeless branding to this day.
The workload was now too much for the husband-and-wife team, so we took on our first employee, Stewart, who remains with us today.
More awards followed, as we expanded to range to include new and exciting beers such as Sundowner which took home the Champion Beer Award from Taste of the West.
To keep up with the demand, the team rapidly expanded, taking on George as lead-brewer, Tammy in sales and Simon doing cask-washing and delivering. We also added a fourth fermenter to enable more brewing, and the ability to produce kegged products.
After doing some experimental canning runs in 2017, 2018 was the year when we fully committed to canning, with some fantastic results. We launched our series of seasonal brews, each featuring artwork from Falmouth university students creating truly eye-catching products. Padstow Pilsner, re-invented in can, won Best Beer at the Great British Food Awards against some stiff competition.
Growth continues apace, and we spent the winter squeezing a new fermenter into the brewhouse so that we could keep up. We exported our first beers to Europe, and attended the Metz Beer Festival in October. Our beers are diverse in styles and critically acclaimed. As I write this, we are about to launch our first Imperial Stout. Watch this space!
Awards
Cheers to us

Awards are recognition of our achievements, independently judged. So they mean an
awful lot to us. We won our first CAMRA award for Padstow IPA within six months of
starting production, and it remains our best-seller in bottle today.

COMMUNITY AND THE ENVIRONMENT

As a brewery we have always aimed to minimise our impact on the environment, and worked hard to support causes which enhance our local community. All of our spent grain and hops are donated to a local farmer as cattle and pig feed, and we rigorously sort our recycling to minimise landfill and protect our precious oceans from waste plastic. Like many breweries we use a heat exchanger in the brewhouse to recycle waste heat into the next brew.
Two Columns
National Lobster Hatchery

Since 2015 we have been working with the National Lobster Hatchery in Padstow. This fantastic charity encourages the sustainable fishing of lobster, preserving the stocks and with it helping to support local fishermen and restaurants which depend upon this delicate fish. Lobster Tale is a 4.5% zesty wheat beer, and every bottle sold donates 10p to this fantastic cause. You can find out more at www.nationallobsterhatchery.co.uk. If brewing beer is not enough, we recently hosted the inaugural Padstock festival, with proceeds from this fantastic party helping to support the hatchery.
Two Columns
RNLI

You can’t live or work in Cornwall without being aware of the sea, and it is equally impossible to be unaware of the dangers is poses, especially to those whose livelihood depends upon it. When George and Simon were making up names for new can beers at the start of 2018, Lifeboat Lager kept coming to the fore. The idea of brewing a really great lager to support such a great charity stuck, and the Lager was born. Since then we have brewed the beer a number of times, and attended the inspiring Padstow and Newquay Lifeboat days to help support the events which raise additional funds to support the RNLI. This year we even ventured as far as Poole to support the RNLI College Food and Drink festival. We hope that this partnership will continue for years to come. You can find out more about the work the RNLI do at www.rnli.org
Two Columns
The Fishermen's Mission

Cricket on the Bar

Born out of a great idea, playing a cricket match on the sand bar in the camel estuary in August is such an obvious way to spend your Sunday afternoon. We couldn’t believe it hadn’t been done before, and with the help of the Cornish cricket league, and volunteer teams from Padstow Social Club and the Red Lion Pub, in 2018 cricket on the bar became a reality. The first match ended in a slightly soggy drawer, but in 2019 the return leg was more decisive. Cricketing exploits aside, we decided from the off that this event should support the Fisherman’s Mission, an amazing charity whose work helps to support those who have lost loved ones at sea, or who need support after a lifetime in the fishing industry, one of the most hazardous occupations in existence. www.fishermensmission.org.uk
Two Columns
Falmouth University

When in 2018 we decided to put our first beers into can, our focus was how to make the cans standout in a crowded marketplace. In Cornwall we are surrounded by talented artists, and Falmouth University in particular is a hub of creative energy. When we approached them with the idea of a collaboration – to feature student’s artwork on our cans – they were hugely supportive. And we continue to be blown away by the results. Combining great beer and great art is a perfect partnership, and one we are continuing into 2020.
Newsletter

Are you a customer of Padstow Brewing Co?
Sign up below and we'll send you emails about our seasonal beers, latest brews, and special offers and promotions.
Border
Social

Any cookies that may not be particularly necessary for the website to function and is used specifically to collect user personal data via analytics, ads, other embedded contents are termed as non-necessary cookies. It is mandatory to procure user consent prior to running these cookies on your website.