Hey there lovers of craft beer and real ale! I’m Ricky, one of the brewers at Padstow Brewing Co and I’m planning on writing a blog once a month. I’ll be bringing you exclusive insights from life inside Padstow Brewing Co. So you can get the skinny on new releases, the return of old favourites and anything and everything that might be interesting along the way. However, do keep i

n mind I’m a brewer not a writer so #bekind.

To kick things off I thought I’d talk about our first ever sour beer at Padstow Brewing Co. We’ve wanted to do a kettle sour for a long time, and when we finally found some room in the brewing schedule, we knew we had to do it. We have a long history brewing beer with George from newly formed Bluntrock Brewing and as soon as we started throwing ideas around we knew this one had to be a collaborative brew!

For those of you who aren’t familiar, a kettle sour is essentially a beer that is deliberately exposed to bacteria to create the sourness. The addition of fruit helps to contribute towards this and what makes it a kettle sour specifically is, rather than exposing our wort (liquid extracted from malt / mashing process that becomes beer) to the elements and wild bacteria like you would with a lambic style beer, we contained it within the kettle (wort boiling vessel) and p

itched a chosen bacteria that fits the flavour profile we were after and keeps the process more controlled.

We love it when we can reflect the seasons in our brewing – inspired by the start of Autumn, we chose fruits accordingly, and settled on raspberry, blackberry, and plum. This is because we wanted our sour to reflect the winter season but also act as a reminder of the summer, especially now it’s starting to get colder and darker! 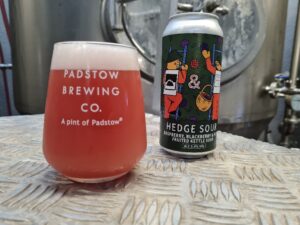 We settled on Hedge Sour as the name for this beer – We went with Hedge sour rather than Hedgerow sour because in Cornwall there are still miles and miles of historic stone ‘hedges’. The unique and quirky can art has been provided by James of Face Ache Designs, the man who is bringing the characters from BluntRock to life and represents a fun change from our usual style here at Padstow.

In my totally unbiased opinion as I was off when this brew took place, this beer is absolutely chock full of raspberry and blackberry which helps to draw out the sour acidity that you would expect from this style of beer. However, this is a very good entry level sour, so if you normally scrunch up your face when discussing sour beer, I do very much recommend giving it a go.

The beer is very well balanced with a slight dryness and the inclusion of malted wheat really does rear its head with a strong wheaty flavour and plenty of body and sweetness. Finished off with subtle plummy notes both on the nose and at the very tip of your tongue after a few seconds of pondering. We really are taking you from sour town to wheatville.

Despite my serious FOMO from missing this brew day I can still confirm that Simon and George have done a fantastic job on this beer. Meaning I can enjoy this latest brew as a fan, great job lads! Hedge sour will be on sale just in time for Christmas from Friday 10th of December so grab yourself a can or two here  and don’t forget to let us know what you think!

As ever please do reach out to me on social media and let me know if there are any topics you want covered in the future. 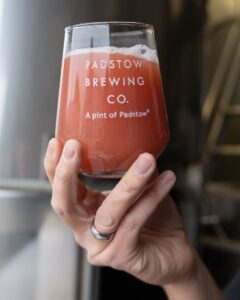